IoT, AI, and the future battlefield 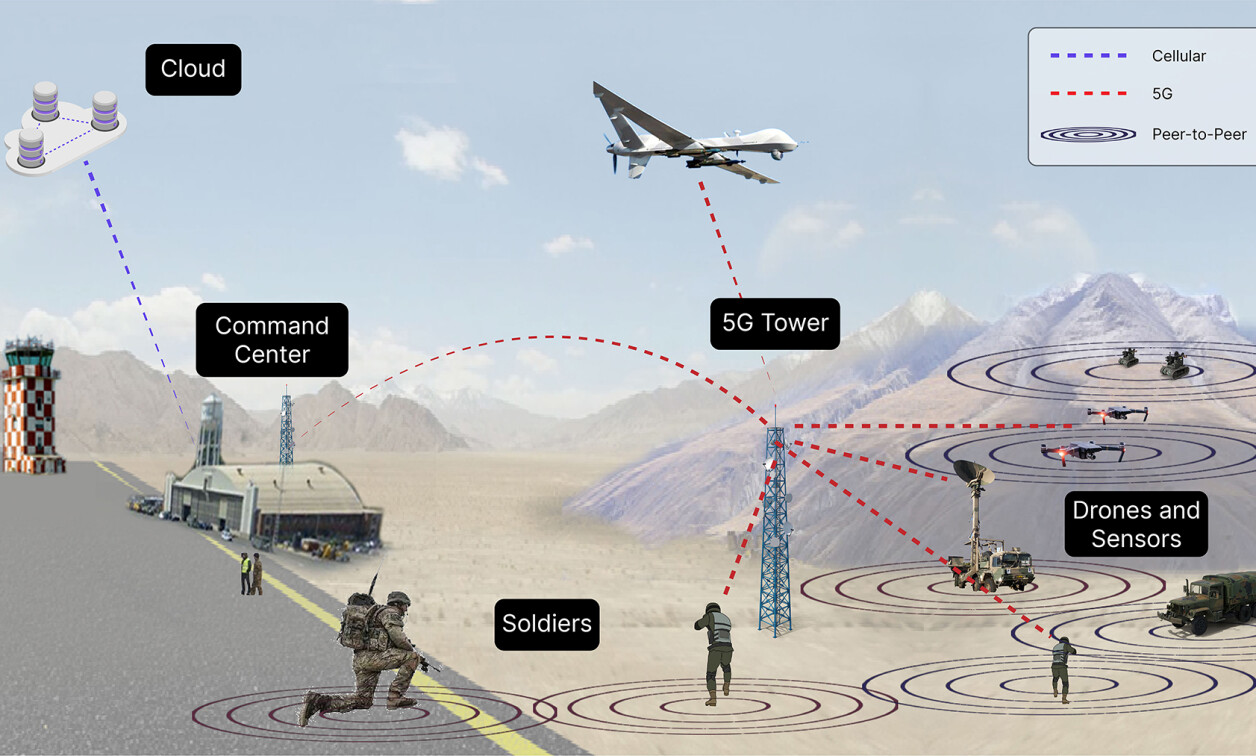 Future conflicts will require critical decisions made within hours, minutes, or seconds – not days – that entail analyzing an operating environment and issuing commands, according to a Congressional Research Service publication on the Joint All-Domain Command and Control (JADC2) initiative. One way the Department of Defense (DoD) aims to speed up and automate decision-making is through a massive military Internet of Things (IoT) and artificial intelligence (AI).

A major DoD initiative, JADC2 aims to collect data streams from thousands of battlefield vehicles, environmental sensors, and other intelligent devices across every military branch. AI and machine learning (ML) can then be used to deliver relevant information enabling quick decision-making at the front lines – even down to identifying military targets and recommending the optimal weapon to engage them.

Military IoT includes many different “things” – everything from battlefield sensors and weapons systems to tracking devices, communications equipment, wearables, drones, ships, planes, tanks, and even body sensors. Together they stream unprecedented volumes of real-time information to the battlefield.

Each branch of the military has its IoT-related initiatives. For the Air Force, IoT is an essential component of its evolving Advanced Battlefield Management System (ABMS). For the Army, it’s the Army Futures Command, and for the Navy, Project Overmatch. The overall goal of JADC2 is to tie all these initiatives together and make them work as a single force successfully on the battlefield.

The success of this massive IoT initiative depends of course on the ability to collect and store huge volumes of streaming data from thousands of “things” in real time. A much greater challenge, however, is actually making sense of all that information instantly and getting the results to warfighters fast enough that they can use it to their advantage. The technical obstacles are formidable and include:

The DoD is in the very early stages of planning and implementing JADC2 and IoT, with many of these decisions still to be made and only a few limited demonstrations of IoT’s potential to date. Assuming most of these IoT challenges can be met, the use cases for manned and unmanned applications are compelling and many. Following are several examples.

Autonomous weapons systems: Human beings continue to be the principal battlefield agents and drivers of success. However, autonomous surveillance and weapons ­systems such as military drones, smart missiles, and unmanned ground vehicles can conduct advanced battlefield surveillance, enhance battle intelligence, and even engage targets to preserve soldiers’ lives. They can also bring precision to the battle via AI and technologies such as facial recognition that can target enemy combatants more accurately than humans and avoid friendly fire and civilian casualties. Deciding on the division between human and autonomous decision-making will be one of the big moral and technical challenges linked to the success of autonomous systems.

Soldier-borne sensors and devices: Often called the Internet of battlefield things, a network of intelligence-gathering and biometric body sensors embedded in soldiers’ combat uniforms, helmets, weapons systems, and transports can convey valuable battlefield information together with soldier location, health stats, and mental state. This knowledge can be used to decide when to move soldiers out of the battlefield in the most adverse situations or administer medical aid proactively on a timely basis to reduce casualties.

Situational awareness: Situational awareness is critical for quick and effective decision-making on the battlefield. Not only is merging IoT with AI a way to enhance and automate situational awareness – including battleground layout, squad and enemy locations, assets, and objectives – it has the potential to provide that awareness faster than ever before without having to rely on centralized command and control.

Leveraging resilient connections and the power of network edge processing, unmanned systems and other IoT surveillance devices can share and merge data to deliver superior intelligence, surveillance, and reconnaissance (ISR) information directly to the front lines. The use of AI to assist and automate many surveillance functions can lighten the stress and cognitive load on soldiers on the battlefield. (Figure 1.) 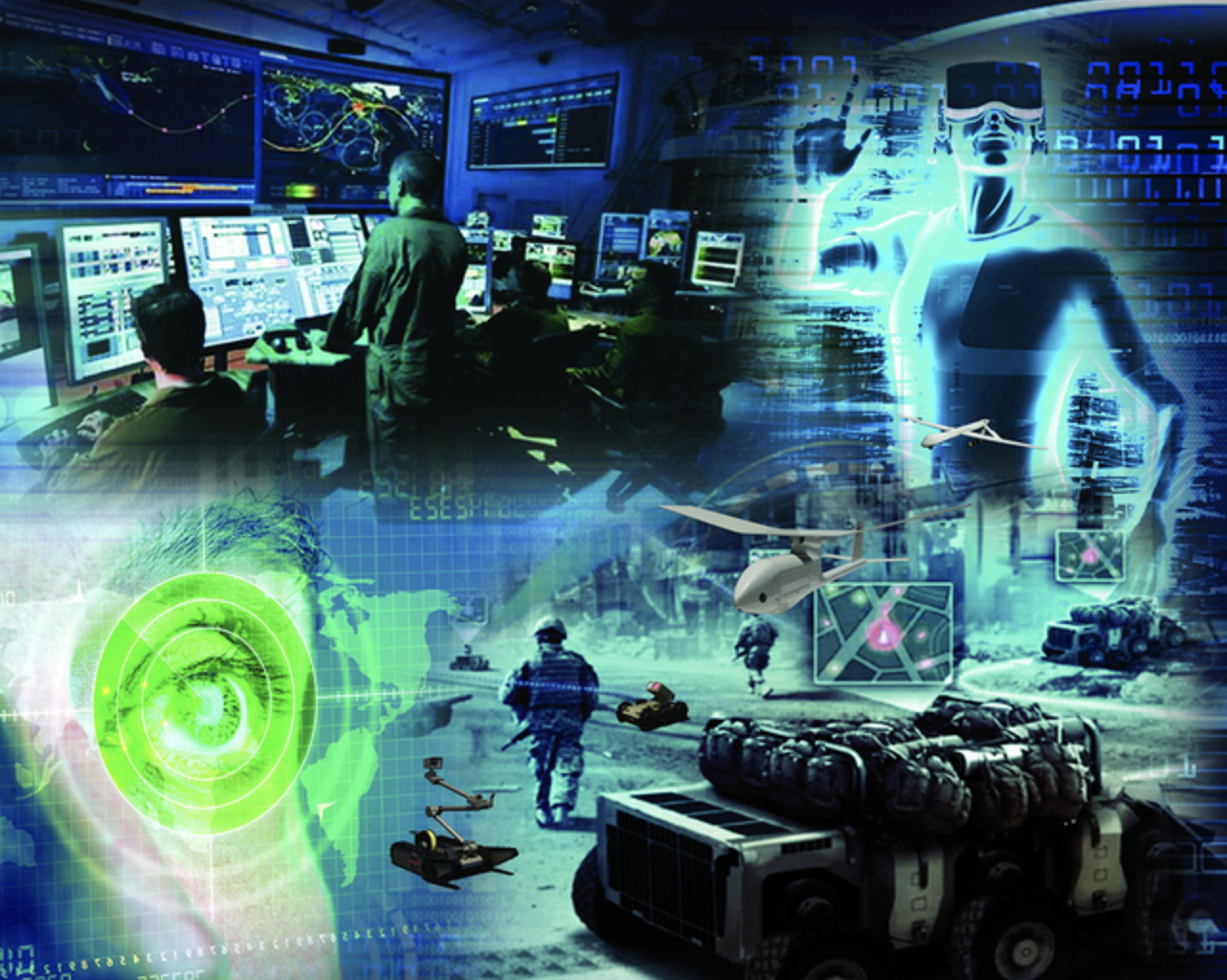 Connecting drones, sensors, and other devices to local edge database/AI/ML servers via 5G or another common fabric makes information available when the cloud is not accessible or too distant to deliver information quickly. When cloud connections are feasible, IoT can take advantage of the cloud’s massive scalability and processing power.

Even in remote situations where 5G is not available or cyberattacks render it infeasible, alternative available peer-to-peer networks such as WiFi, Bluetooth, or private proprietary communications solutions can synchronize distributed databases and ­provide the network and data resiliency needed on the battlefield. A solution is ­available for harnessing peer-to-peer connections and synchronizing data across them, then ­connecting and synchronizing data with local, regional, and cloud servers when they are available.

There are numerous other IoT use cases, such as supply-line vehicle monitoring, military-­base security, preventive maintenance on the battlefield, and even inventory management. As the battlefield becomes more complex and unpredictable, IoT and AI will become an increasingly valuable strategy for accelerating and automating critical decision-making, outthinking the enemy, and minimizing combat and civilian casualties.